Message from our Curate in Charge,
The Revd James Marston

From the celebrations of All Saints, we turn our attention to a period of reflection as we mark All Souls this week and Remembrance Sunday later this month. This week, in my message, I include my reflection at this week’s service as we remembered the loved.

Let us pray
Support us, O Lord,
all the day long of this troublesome life,
until the shadows lengthen and the evening comes,
the busy world is hushed,
the fever of life is over
and our work is done.
Then, Lord, in your mercy grant us a safe lodging,
a holy rest, and peace at the last;
through Christ our Lord.
Amen.

I think this is perhaps one of the greatest of prayers. It is said at one of the most poignant parts of the funeral service – the final prayer said not for the person we have just said goodbye to but for those of us left behind. Written by Cardinal John Henry Newman, I think it distils into a few powerful words the hope found in the Christian faith – the hope of a holy rest and peace at the last with the God of love.

I feel the last two years for many of us has been a time of uncertainty, change and loss. Loss of freedom, loss of confidence, loss of certainties, and loss, for some, of loved ones.

All Souls is as much a time to remember as a moment in which to rest in God’s love. God knows your heart. God does know how you feel.

And as we lament, reflect, and remember in the stillness of our hearts, I am constantly reminded, how in difficult times, relying on God, turning to the consolation of our faith – however fragile that may sometimes be – and remembering the hope of the resurrection of Jesus Christ and the comfort of God’s love for each and every one of us can help and support us all through this troublesome life.

May you find consolation in God’s love, may you find refuge and strength in the light of God’s presence, and may all souls, all our loved ones we remember tonight, rest in peace and rise in glory. 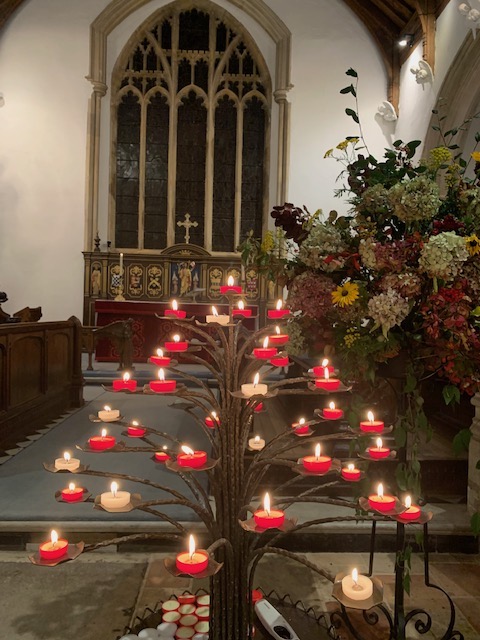 Candles from the Remembering the Loved service on 2nd November

Collect
Almighty Father,
whose will is to restore all things
in your beloved Son, the King of all:
govern the hearts and minds of those in authority,
and bring the families of the nations,
divided and torn apart by the ravages of sin,
to be subject to his just and gentle rule;
who is alive and reigns with you,
in the unity of the Holy Spirit,
one God, now and for ever.

First Reading
Jonah 3.1-5, 10
The word of the Lord came to Jonah a second time, saying, ‘Get up, go to Nineveh, that great city, and proclaim to it the message that I tell you.’ So Jonah set out and went to Nineveh, according to the word of the Lord. Now Nineveh was an exceedingly large city, a three days’ walk across. Jonah began to go into the city, going a day’s walk. And he cried out, ‘Forty days more, and Nineveh shall be overthrown!’ And the people of Nineveh believed God; they proclaimed a fast, and everyone, great and small, put on sackcloth. When God saw what they did, how they turned from their evil ways, God changed his mind about the calamity that he had said he would bring upon them; and he did not do it.

Second Reading
Hebrews 9.24-end
For Christ did not enter a sanctuary made by human hands, a mere copy of the true one, but he entered into heaven itself, now to appear in the presence of God on our behalf. Nor was it to offer himself again and again, as the high priest enters the Holy Place year after year with blood that is not his own; for then he would have had to suffer again and again since the foundation of the world. But as it is, he has appeared once for all at the end of the age to remove sin by the sacrifice of himself. And just as it is appointed for mortals to die once, and after that the judgement, so Christ, having been offered once to bear the sins of many, will appear a second time, not to deal with sin, but to save those who are eagerly waiting for him.

Gospel Reading
Mark 1.14-20
Now after John was arrested, Jesus came to Galilee, proclaiming the good news of God, and saying, ‘The time is fulfilled, and the kingdom of God has come near; repent, and believe in the good news.’  As Jesus passed along the Sea of Galilee, he saw Simon and his brother Andrew casting a net into the lake—for they were fishermen. And Jesus said to them, ‘Follow me and I will make you fish for people.’ And immediately they left their nets and followed him. As he went a little farther, he saw James son of Zebedee and his brother John, who were in their boat mending the nets. Immediately he called them; and they left their father Zebedee in the boat with the hired men and followed him.

Sermon by The Revd James Marston
Preached at Aldeburgh on October 27th, 2021
All Saints’ Day

May I speak in the name of the living God, Father, Son, and Holy Spirit, Amen.

As some of you know for my master’s degree in theology I studied Dorothy Day, a woman who, even in her lifetime, was touted as a saint.

Day was the founder of the catholic worker movement, a peace activist, a prisoner of conscience, a devout roman catholic, a journalist, a political and prophetic voice who challenged the church to which she belonged, a woman who fed the poor and housed the homeless, a champion of social justice and an exemplar of radical Christianity.

Dorothy Day lived her life according to the manifesto of the Sermon on the Mount.

She was an extraordinary woman and a hard act to follow, but Dorothy Day was also human, she was awkward, sarcastic, impatient and, as I read her letters and diaries, could be, on occasion, somewhat blunt, kurt and downright rude.

As her progress to sainthood continues, and she is now deemed a servant of God in the Roman Catholic Church, I suspect she would be utterly appalled at being sucked into the powerful patriarchy she challenged and to which she proved such a thorn in the side. She didn’t like the idea of sainthood famously remarking she didn’t wish to be dismissed so easily.

What Dorothy meant was she was no submissive lady of virginal virtue, no mere friend of God, no saccharine drenched devotional Christian. Dorothy Day acted, did, and followed Jesus in a way that upset almost everyone she encountered.

St Lawrence, the patron saint of Knodishall, was a second century roman, a deacon in the church, who defied the emperor and was martyred, roasted alive on a grid iron according to legend. A man whose faith compelled him to speak and act.

St Mary, a popular patron saint of many Suffolk medieval churches, was the overarching witness of the Christian faith, the woman chosen by God to bear his son and witness Jesus’ life, ministry, death, and resurrection.

The patron saint of fishmongers as well as Scotland, St Andrew, was a simple fisherman, a brother of St Peter, and one of the first apostles called by Jesus. A martyr whose experience of Jesus and the resurrection compelled him to die on an upside down cross.

And St Peter and St Paul, fathers of the church who witnessed first-hand, and in different ways, the risen Christ. St Paul. The rather laborious theologian and letter writer, St Peter the famous denier of Jesus and yet also a man who helped found his church and went to his death for his Lord.

All these men and women were humans compelled by their faith to be who they were. To do extraordinary things in the name of their faith.

We do not worship the saints. We may ask them to intercede for us, but the communion of saints is not the object of our worship or praise. Instead, they all point us towards God and, I think, learning about them, allowing ourselves to be inspired by them points us towards the holiest part of ourselves, the place in our hearts where we allow God in.

With a patron saint for each church in our benefice we are also reminded of the distinct character and attributes of our worshipping communities.

The passions, traditions, and missions of each of our churches are slightly different. Indeed, I often wonder as I preside at each if they may even reflect in some ways the characters and personalities of the patron saints themselves.

Nuanced though they may be, the differences in each need not and are not diluted nor diffused by Church of England structure or incumbent’s whim. On the contrary I would suggest each and every church in our benefice has much to offer its own parish and community.

Nonetheless, we must not lose sight of that which binds us together, that which brings Dorothy Day, Lawrence the deacon, Mary the virgin, Andrew the fisherman, and Peter and Paul, into communion – the faith we and they share.

And that is a faith that demands not only that we love our neighbour but that we pull on the same rope, pull together, as we are doing, in times of uncertainty or change.

My challenge to you as a benefice, as people of four separate and one combined worshipping community, is to be inspired by your patron saint and the faith they held; to follow his or her example as best you can. To speak out, to care for others, to ask questions, to learn, to retell the story, to be prophetic, to challenge injustice, and to follow Christ in all you do.

It is an old adage but together we are greater than the sum of our parts – Peter, Paul, Lawrence, Andrew, Mary and Dorothy all knew this and that is why we can make the effort to celebrate them, and the churches of which they are patron, and all that our benefice churches are, and can be, and will be, together.

Post Communion
God of peace,
whose Son Jesus Christ proclaimed the kingdom
and restored the broken to wholeness of life:
look with compassion on the anguish of the world,
and by your healing power
make whole both people and nations;
through our Lord and Saviour Jesus Christ. 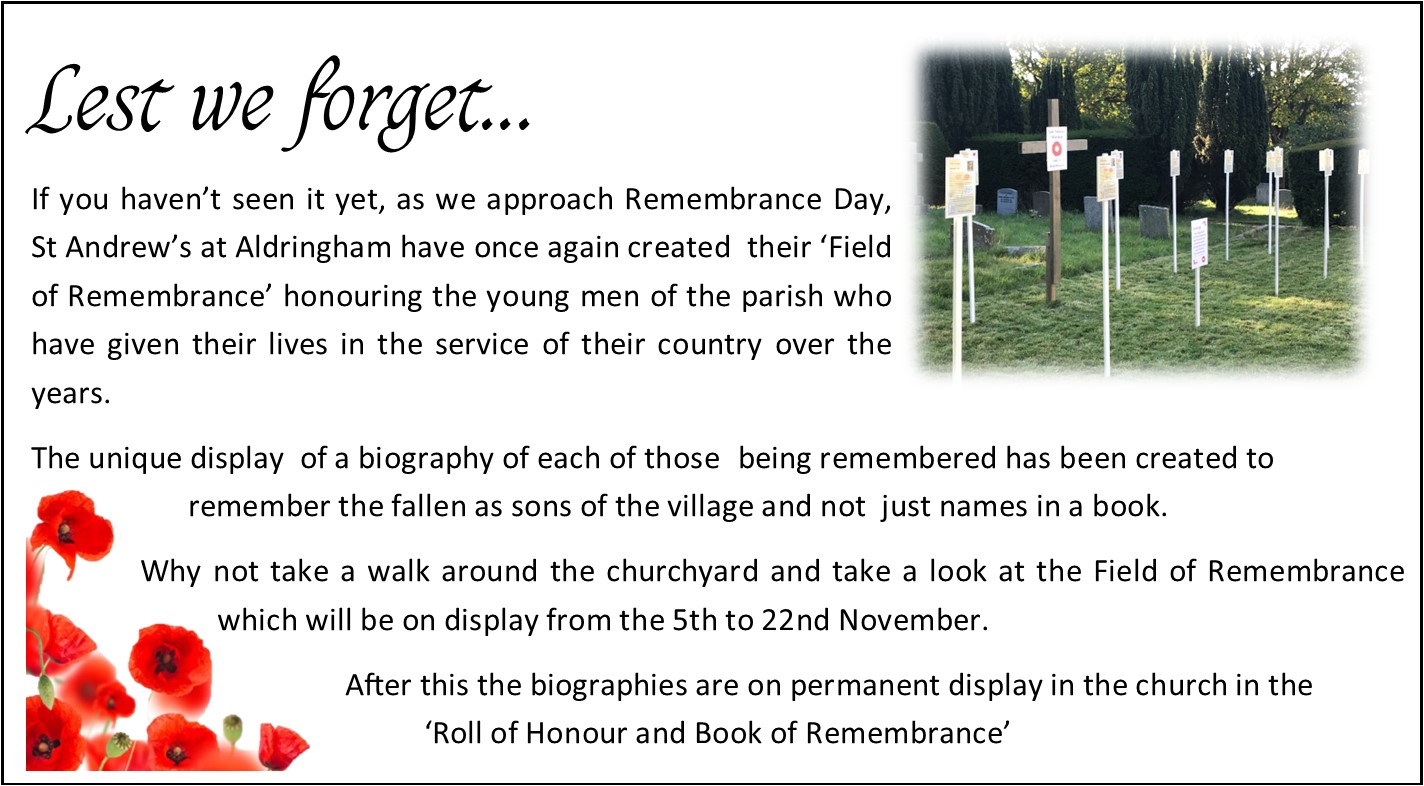